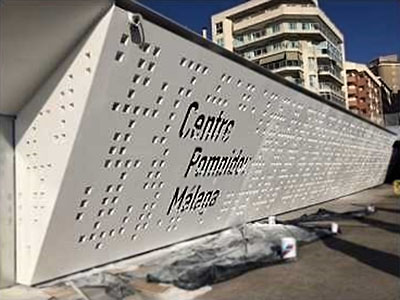 It’s not a coincidence that this hurried project will be in time for a public and glorified official inauguration just before the municipal and regional elections’ so said during a meeting of the transparency commission, José María Luna, the Director of the Picasso Birthplace Museum, who will also direct the Pompidou and the Russian Art Museum.

The architect responsible for adapting the Cube, under which the Pompidou is being built, Javier Pérez de la Fuente, explained the construction would be completed by January 23 adding it has the added requirements of high security and perfect lighting. José María Luna then explained the transport of the artworks would begin and that would take, with the hanging and conditioning about two months which will allow the centre to open on March 28 2015.

The final entry price structure has not been finalised, but the maths to establish it has. With a forecast of 250,000 visitors a year, of which only 40% will be asked to pay, the income is estimated at 1.2 million €, but from that sum, according to the Málaga Culture Councillor, Gemma del Corral, 4.2 million € has to paid by the municipality for the maintenance of the building every year.

She said negotiations had started with several companies to become patrons of the centre and these are ‘going very well’. The opposition PSOE and IU in the words of the councillor Manuel Hurtado, highlighted the ‘enslaving conditions’ which the French responsible for the Pompidou had placed on the City Hall as seen in the document signed by both sides.

The PSOE also noted they were against the work starting last August as at that time the Port Authority had not granted any permission.